This Valentine’s day, lots of us will splash out on a significant other. Many of those significant others will have four legs, fur, and eat out of the bin. If that feels familiar, hopefully you’re thinking about your dog. Assuming you are, you’re not alone. Market Watch reports that as many as one in five people will buy their dog a Valentine’s Day gift.

In the US alone, all that spending adds up to a phenomenal $886 million dropped on dog Valentine’s Day gifts. It’s a big jump from the $519 million that went to animal Valentine’s treats in 2008, but is inline with the growth of the wider pet care market. Over the last decade, the pet product economy has ballooned by 66%. In comparison, the global economy has grown by 43%.

Of course, that $886 million figure is dwarfed by the over $20 billion annually spent on traditional Valentine’s Day items. But it’s a marker of an interesting trend. While our interest in pet Valentine’s Day celebrations is growing, we’re showing less interest in human Valentine’s Day festivities. Considering a survey from Rover.com found that most people cuddle their dog more than their partner, we could be choosing to celebrate our four-legged loves over our two-legged ones.

Hey, we’re here for it. After all, there’s no risk your dog will break your heart.

Would You Get a Tattoo of Your Dog? 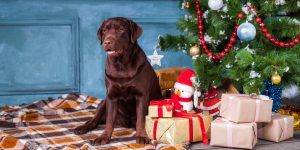 We’ve compiled some cute dog Christmas present ideas for every kind of pup. Although, we can’t guarantee they’ll like any of these as much as lying on the couch with you all day. The Best Dog-friendly Airbnbs in Tasmania