Earlier this year we held the Great Australian Dog Survey. It was a deep dive into how Australians treat, think about, and love their pets. We learnt a lot of really interesting things, but one thing really surprised us and we can’t get it out of our head. Turns out, a lot of people thing it’s ok to share an icecream with their dog. Of the respondents, 45% said they had kept eating an ice cream after their dog took a lick.

At first, this blew our minds, then we started looking into it. Do you know how many photos there are on the internet of people sharing ice creams with dogs? It’s a big thing. And we’re going to assume that if you’d share a summery treat with them, you’re probably sharing other meals too.

So, here it goes, weird to say but… please don’t directly share food with your dog.

Why Sharing Food with Your Dog Is Unhygienic

We love dogs, but let’s face it they’re not the cleanest creatures. They’re known to stick their faces in everything–dirt, garbage, poop, other dog’s butts, their own butts. Now everyone has bacteria, viruses and germs in their saliva, but dogs have a lot of it. While most of the stuff in their mouth is harmless enough, they can carry zoonotic organisms. Those are bacteria or parasites that pass between animals and humans to cause diseases such as clostridium, salmonella, E coli, and campylobacter. If that wasn’t gross enough, sharing food with them also puts you at risk of picking up internal parasites.

Most of the time, if you have a healthy immune system, your body can fight off a lot of those nasties, but not always. And when things go wrong, they really go wrong. For example, dogs have been known to spread haemophilus aphrophilus to people, which can cause brain abscesses and heart inflammation. While those internal parasites we mentioned before, if you ingested, can find their way into your vital organs and cause lots of serious medical issues. No wonder the British Veterinary Association has strictly cautioned against sharing food “on grounds of pet and human health”.

But Humans Are Gross Too, Right?

You might be thinking, is sharing food with your dog really more unhygienic than sharing with people? Let us take this chance to bust the longstanding myth that our mouths are dirtier than our dogs, so sharing food poses no extra risk.

Yes, people have a lot of bacteria in their saliva too, but that’s a misunderstanding of how bacteria works. As germ expert and associate professor of environmental health at the University of Arizona Kelly Reynolds told Buzzfeed News: “The bacteria counts tend to be similar but the types of bacteria are very different.”

She explains that mixing bacterias between people and dogs can throw off the delicate balance of good bacterial flora in our mouths that helps keep us healthy.

Should You Let Dogs Lick Your Face?

Sorry to be a downer, but all this applies to them licking your face too. Any time dog saliva has a chance to get into your mouth, eyes, nose, or even ears you’re putting yourself at risk. Sure, the chance of you actually getting sick is low, but it’s still real–especially if you’re older, a kid, or immunocompromised.

In 2016 it was widely reported that a 70-year-old woman almost died from septicaemia caused by Capnocytophaga canimorsus, a bacterium picked up from her dog. It’s believed the bacteria was spread by her pet licking her face.

The good news is licking in general is fine–just keep their tongue away from your face. Speaking to the New York TImes, Dr. Leni K. Kaplan at Cornell University’s College of Veterinary Medicine assured that: “When dog saliva touches intact human skin, especially in a healthy person, it is extremely unlikely to cause any problems, as there will be very little absorption through the skin”.

A Note on Sharing Food in General

Getting back to food for a moment, now we know sharing food with your dog is unhygienic, but it can also be bad for them. A lot of the treats we love are surprisingly dangerous to dogs. While most people know to avoid things like chocolate or chicken bones, it’s easy to miss other potentially toxic ingredients. Raisins, some nuts, onions, and many rich foods can cause serious issues.

Even if you’re confident you’re sharing something safe, you’re still put them at risk of overfeeding which can lead to obesity. Best to play it safe and keep them on their regular diets while showing them love through play, attention, and cuddles.

For more on healthy dogs (and humans), check out:

Everything You Need to Know about Brushing Dog’s Teeth
A Deep Dive into Dog Smell: Unravelling the Greatest Pet Mystery
A Dog’s Guide to Great Skin and Fur What Your Dog Sneezing Really Means 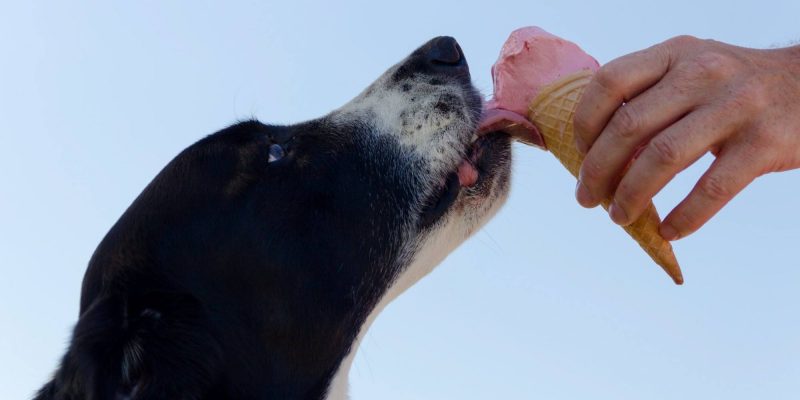 Is Sharing Food with Your Dog Unhygienic?