People often say that the miniature pinscher resembles a shrunk-down doberman. Now, that’s technically not the case–they’re a cross of several other breeds. But there is truth in the idea of them being a little “big dog”.

Miniature pinschers’ energy, independance, personality, and confidence way outpaced their teeny tiny bodies. No wonder they’re known as the “king of toys”. For the record, that refers to their standing among toy breeds. But it could also speak to their ability to demolish any chew-thing that comes their way.

Like many toy breeds, the miniature pinscher was originally bred to hunt vermin in homes and on farms in Germany. As mentioned, they come from cross breeding dachshunds, German pinschers, and Italian greyhounds. While they do share a cousin (German pinschers) with dobermans–which could explain the family resemblance–their history actually reaches back a cool 200 years further.

If you haven’t already picked up, this is a small dog. They weigh in between three and six kilos. A miniature pinscher can be solid red, stag red, black, chocolate, or blue. And yes, they look like little dobermans.

What You’ll Love about a Miniature Pinscher

Smart: Being pretty intelligent this breed is easily trained (although their smarts can also make them stubborn).

Active: As mentioned, they combine the best of big and small dogs. One of the most active breeds, they love adventure and will happily join you on a walk or a run. But they’re also small enough to happily live in an apartment, share the couch, and not decimate your food bill.

Low maintenance grooming: With short coats these modest shedders don’t need much more than a regular brush and the occasional bath.

Loud: Yeah, that thing we said about being good watchdogs? That goes both ways. They are frequent barkers, especially when bored. Which brings us to…

Easily bored: Being smart and active means you need to keep them physically and mentally occupied. If they run out of things to do they may start destroying your garden or escape altogether. Finding suitable fencing can be a challenge.

Orthopedic issues: Like many small breeds they can have issues with patellar luxation, arthritis and Leggs-Calve-Perthes disease–which may present as rear leg lameness.

Eye diseases: They can be prone to cataracts and progressive retinal atrophy (PRA).

Epilepsy: The breed is prone to epilepsy, although it only affects about three percent of dogs and is usually controlled with medication. 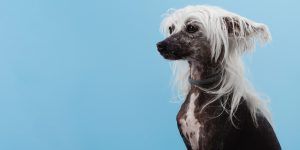 Thanks to their, shall we say “unique”, appearance Chinese crested are often mocked. But trust us, once you get to know this loving, smart, kooky breed you will be in love.

Silky Terriers Are Feisty, Friendly, and Love Being the Centre of Attention