I was 16 when our family dog Katie was put down. It wasn’t my first experience of death, but her passing reordered my life more than any previous loss. Over 15 years later, I still think about her constantly. She’s sewn into family memories, stories, and photographs. Sometimes she’ll come to me in a flash. Without any prompting I’ll return to her last day: saying goodbye before leaving for school, her tail thumping against the well-chewed side of her basket, enjoying the unusual rush of early morning attention.

I wanted to take the day off to go to the vet and be with her when she was euthanised. But it wasn’t the kind of thing you did. Days off were for sick grandparents, family emergencies, and illness. Not the death of a pet.

By the time our second dog Benji died a few years later, my family had become more attuned to the crushing grief of losing a pet. This time we talked about what the loss would mean, and how to support each other in the grey days after his last seizure. When our final family dog, Xander, passed away I was an adult. This time I left work when I got the call and went straight to my mum’s house. We cried together over a shared piece of cake.

Across three pets and over a decade our family opened up to the grief that swallows you when an animal dies. But while we could speak about it to each other, it still felt like something that didn’t have a place outside of the house. To us it was a family tragedy. To others it was “just a pet”. Something to “get over”.

When writer Kate Leaver’s Shih Tzu, Lady Fluffington, died she was inconsolable: “I mourned like I would mourn any other death, including a human friend or family member. I howled and ached and sobbed for days.” Once the initial shock passed, a “dull anguish” still remained. Years later she admits, “the longevity of that grief surprised me.”

We’re taught from a young age how to feel when a person dies. We see it performed all around us: in our communities, on TV, in songs. It’s a practised display of emotion, propped up by ancient and familiar rituals. We have funerals, write obituaries, talk to each other. “When we have a human funeral, relatives gather from all over the world and they fly in and spend a week with you and give you lots of hugs but with a pet people might just send you a nice message on Facebook,” reflects Michael O’Donoghue, a vet and co-founder of pet grief counselling service People and Pets. “You don’t get that big ceremony or send-off that can be really healing.”

For Kate, that barrier between how she felt and who she could express it was additionally painful: “I found it difficult to talk to a lot of people about it, because I think there’s a little bit of an underlying attitude like ‘It was just a dog, move on, get back to me when you lose a human being.’”

The reality is, while losing any loved one is traumatic, the unique relationships we have with our pets creates a specifically searing loss. One that is often as isolating as it is brutal. Dogs and cats can live for almost 20 years. Horses sometimes make it to their 30s. Many bird species have lifespans that rival humans. For most of us, it’s rare to have a relationship with a person last as long as a pet’s life. That closeness is even more compounded when we get them as children.

When Georgia’s 19-year-old cat passed away she was shattered. She’d been a child when she got them, now in her 30s, the relationship had spanned the majority of her life. “I was distraught for weeks and so many people just didn’t get it…That’s two thirds of my life with her by my side. High school, uni, first jobs, first redundancy, starting my business,” she explains. Her experience isn’t unusual. Many of the people I spoke with for this article shared similar stories, often remarking that the animals felt more like siblings than pets.

While human relationships can be shaken by disagreements, upheaval, and change, pets stay steady. Following the death of a pet, we don’t only lose a friend who is unmatched in loyalty and reliability, we lose a support that can’t be replaced. As a result, grieving an animal can be a deeply isolating time made worse by other people’s reactions.

When photographer Michelle’s dog Winnie died suddenly, she didn’t know how to deal with the loss. “The emotion was overwhelming, for both myself and my husband. We didn’t leave the house for three days,” she admits. Additionally, their friends and family didn’t know how to console them: “My mum told me that I needed to get on with life. I wasn’t even sure how…. After three days my husband said he couldn’t cry anymore. He kinda put it past him and wanted to block it out. I cried every day for a year.”

Karyme had a similar experience. Despite losing her dog several years ago, she still struggles to speak or think about them for more than a minute. “I never really lived the grief because I don’t know if I can handle [the thought of them]…it’s something that I just buried very deep in my heart because I don’t have the courage to deal [with it],” she explains.

The admission of still constantly thinking about pets who died years ago was repeated again and again across interviews. But while it’s understood that grief over a person can last a lifetime, there’s an expectation that pet grief has an expiration date. “Even though I obviously believe people should grieve their animal deaths fully, I also accidentally imposed a deadline on myself, or at least expected to get over it a little sooner. It probably took a year before I could wake up in the morning without thinking of her,“ remembers Kate.

How To Heal After the Death of a Pet

As my own family learned to talk and grieve more openly over a decade, there have been developments in the way we publicly recognise pet loss. When an animal dies, many vets will send the owner a card offering condolences. Although people have expressed that the practice felt more like a generic customer service exchange than a deeply felt gesture.

Overseas, grief support services (such as People and Pets) are a blooming industry. With groups like Blue Cross and Animal Medical Centre offering hotlines and open support groups. The lack of formal grieving rituals has also been noted by countless business owners. Last year Forbes flagged pet end of life services as being a major growth area. In 2016 alone the pet funeral industry brought in $100 million profit.

Of course, that cash surge can leave some feeling uneasy. Many still prefer to seek comfort through community and communication. Rather than pay for a lavish funeral, they opt to plant a tree, have a party, or get a coffee with friends to share memories and celebrate a pet’s life. Reflecting on gestures that meant the world, Kate adds: “I had some friends and family, bless them, who knew precisely what Lady Fluffington meant to me and they listened while I howled and remembered her. One friend took me out for drinks to celebrate her life and we did a little toast to her sweetness…I wish more people would respond like that when a pet dies. I certainly intend to behave that way if someone I know ever loses a little creature they adored.”

The death of a pet is the ultimate reminder of how unique and valuable their love was. Our feelings and conversations about grief should be equally complex and varied. There are no magic words to share when a pet dies that are guaranteed to offer comfort or relief. All there is, is an acknowledgement of how vital they were, and space to grieve fully. Understanding that they are ultimately totally irreplaceable.

For more feelings and dogs:

Is It Mean to Dress Up Your Dog?

Written by Wendy Syfret on December 11, 2019 for Off The Leash 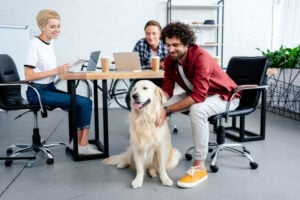