Is Pet Insurance Worth It? If your dog is older, unwell, or a breed with hereditary health issues it may save you money. But otherwise it’s wiser to put that money into a “pet emergency” fund you can access when needed.

Which begs the question: is pet insurance worth it?

Animal Medicines Australia reports that we collectively spend a cool $12.2 billion on pets each year. The RSPCA breaks that out to estimate that the average dog costs their family $13,000 over their lifetime (but who’s counting?). Vet bills make up roughly 27% of those costs. In Australia the average vet expense is around $400 for dogs, although more than half of owners are reportedly willing to pay up to $2500 for treatment if their pet’s life is in danger*.

With that in mind, maybe we should amend those opening statements: Pets are amazing, and their vet bills can be very expensive.

Looking at those numbers, it’s not surprising that 26% of dog owners have pet insurance. It’s a growing industry, too. That rate has jumped 17% since 2003.

*we’d bet that’s higher among Off the Leash readers.

What Is Pet Insurance?

Pet insurance works the same as other forms of insurance. You make monthly payments on a plan so (in theory) if your pet gets sick or is injured you can claim to have a portion of their vet bills covered. Usually about 65% to 85% of the bill is covered, leaving you out of pocket for the rest.

Not all treatments, procedures, illnesses, and situations are covered. Policies vary a lot depending on your pet. Some insurers, such as RSVP, also use a portion of your payments to support other animal causes. But many insurers are offshoots of larger, human-focused companies.

How Does It Work?

In theory you’re paying a monthly fee to avoid a huge bill if something happens to your pet. But, like so many things involving your wallet, it gets complicated fast. Most coverage falls into three categories.

Accident Only Policies: This is usually the least expensive policy, covering vet visits related to accidental harm or injury. For example, if your dog is hit by a car (knock on wood). They usually don’t include pre-existing conditions. They’re more suitable for younger dogs without health issues.

Accident and Illness Policies: This covers the above but also includes illnesses like cancer, infections, or hereditary issues (such as breathing problems with pugs). It’s more expensive, but still has gaps. For example it’s not uncommon for accident and illness policies to not cover de-sexing or dental care.

Comprehensive Policies: As the name suggests this is the most detailed (and costly) cover. It usually includes the above, plus additional treatments such as behaviour training. It may even cover for you in the case of your dog being lost or stolen.

How Much Does Pet Insurance Cost?

Short answer: it depends. Costs can vary depending on your dog’s age, breed, medical history, pre-existing conditions, and how comprehensive the plan is. Consumer group CHOICE has reported that rates range from $180 to $4500 per year.

For context, insurance data has found that “the average claim for a foreign body ingestion was $982, a snake bite was $1,742, and fractures came to $2,715.” Although, it’s also not uncommon for emergencies to spring up that could cost tens of thousands of dollars.

The Problem with Pet Insurance

As mentioned, pet insurance doesn’t include everything. Older pets and those with pre-existing conditions often aren’t covered. Policies are also infamously riddled with loopholes. For example, many won’t pay out for disease with known vaccines (such as kennel cough), or for common elective treatments (such as de-sexing). Additionally, if you’re believed to be at fault–say your pet was hurt after escaping from an unsecured yard–the whole plan could be voided.

Like human insurance, it’s all a bit of a gamble. You make regular payments in case you one day need to make a claim. If you have a healthy pet (fingers crossed) you could end up paying out thousands of dollars that you never see again. But, if the worst happens and your pet ends up needing extensive treatment, it could literally save their life.

Like with any financial commitment you need to read the fine print carefully. Pet insurance is tricky. CHOICE warns: “Pet insurance providers currently have no legal obligation to maintain the competitiveness of your policy and can make any changes they like when you renew annually (including premium increases, reduction in coverage percentages, added exclusions, and reduced payment limits and sub-limits).”

Is It Worth It?

Honestly, the industry is pretty dire. After CHOICE reviewed 76 pet insurance policies they couldn’t find one to recommend. Although they did say that if you are keen to sign up, it’s only really worth it if your pet is young. Their insurance expert Uta Mihm explained: “Premiums are typically lower when opening a policy for a young pet than for an older pet. If you intend to take out a policy, it’s best to do so as soon as possible, as the younger your pet, the less chance they’re going to have a pre-existing condition that will never be covered.”

As mentioned, do your homework and read the fine print. A lot of policies have heaps of exclusions and exceptions that can allow them to reserve the right to cancel your claim or leave you out of pocket. Make sure you understand what is and isn’t covered, and ask about any waiting periods.

Many people asking ‘is pet insurance worth it’ end up creating their own emergency fund by setting up automated deposits into a savings account. That way you have the money on hand, collect interest, and don’t lose any you don’t spend. You will have to make sure that nest egg is considerable though: many pet insurance policies cover you up to tens of thousands of dollars.

It takes time to gather savings, so you do run the risk of needing treatment before that cash is on hand. If you’re thinking about getting a pet, consider starting to put away money before you bring them home. You can also ask if your vet has payment plans, and build a relationship with one that does.

Remember, it stings, but vets are expensive for a reason. Practices cost a lot to run, equipment is pricey, and they aren’t government subsidised. They also aren’t a luxury. No matter the cost, putting off a trip isn’t only dangerous and cruel, it could compound problems leading to a bigger bill later.

With or without insurance, pets can be pricey. If you’re not ready to make that commitment (whether it be through insurance or setting aside emergency cash) then maybe it’s not time to bring home an animal. Just enjoy patting other people’s dogs for a little while longer.

Is Pet Insurance Worth It? The Final Word

Ultimately it’s not about getting insurance or not, it’s about choosing a plan and sticking to it. If that’s insurance, great, just read the fine print. If it’s setting up your own fund, cool, just hold yourself accountable and don’t get into the habit of skipping payments. Your pet does a lot for you, scientifically making your life better and longer, keeping an eye out for them is the least you could do.

For more on looking after your dog, check out:

What You Need to Know about Crate Training Your Dog

Who Owns Your Pet Food Company?

Written by Wendy Syfret on March 4, 2021 for Off The Leash

Can you get pet health insurance?

Yes, many health care providers offer it. While pet-specific health insurance is a growing market.

How much is pet health insurance?

Costs can vary depending on your dog’s age, breed, medical history, pre-existing conditions, and how comprehensive the plan is. Rates can range from $180 to $4500 per year.

What does pet health insurance cover?

Most coverage falls into three categories.

Accident and Illness Policies: This covers the above but also illnesses like cancer, infections, or hereditary issues (such as breathing problems with pugs). It’s not uncommon for accident and illness policies to not cover de-sexing or dental care.

Comprehensive Policies: This is the most detailed (and costly) cover. It usually includes the above, plus additional treatments such as behaviour training. 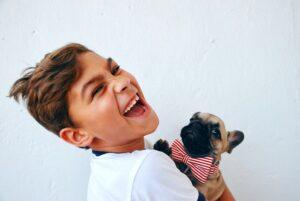